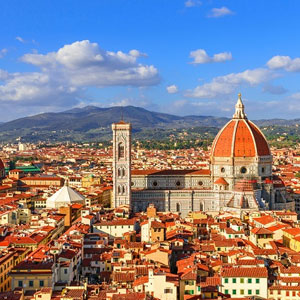 The goldsmiths of Florence represented, and still represent, one of the greatest examples of skill and mastery in gold processing.

If today it is possible to buy in Florence products of great quality and value, made by the expert hands of the Florentine goldsmiths, and if today Florence itself also represents a center of excellence in the training of the goldsmith masters of tomorrow, it is above all due to the great tradition that is is developed in the city around the processing of the most precious metal present in nature.

But where does this great tradition come from? Why has Florence become such an important center for gold processing and trading?

Also in this case the reasons must be sought in the Middle Ages when, around the second half of the 14th century, Florence became the main partner of several states including the Papal State, thus maintaining a relationship that favored the use of gold coins as the main tool. transition.

The papacy used to set up fundraisers to finance the works promoted by making the necessary resources advance by those who had large capitals, capitals of which Florence was particularly provided: in this sense the Florentine mint was one of the most active mints in the peninsula thanks also to a thriving commercial activity favored by the relations that Florence had with various European states and cities and beyond. This helped to strengthen the link with the Papal State, thus favoring transactions between Rome and Florence.

It is therefore not difficult to understand how the large availability of gold in the city has attracted more and more skilled artisans able to transform this material into elegant jewels or precious furnishings that were so coveted by the noble families of the city and rich merchants.